There are a variety of medications that people try, either orally or in an enema solution. Below are some of the most popular, from the mildest to harshest.

Stool Softeners: Emollient laxatives help to soften and moisten the stool. Because they are mild, they can take several days to work and are often used for babies and children who are not easily constipated. A popular brand is Colace. 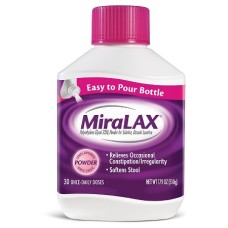 Osmotic Laxatives: These laxatives work by drawing fluid from the intestine into the stool to keep it soft and easier to pass. The most commonly used is Miralax, also called PEG and other brand names outside the United States. Other examples of osmotic laxatives are Milk of Magnesia, Lactulose, and even GoLytely and glycerin suppositories.

Miralax is used by a huge percentage of people with Spina Bifida. Many doctors routinely suggest Miralax to solve all bowel issues. Families have found that Miralax is very effective (yet messy) if given orally for a clean out. It is not necessarily effective for social continence. Many people try for years to find that magic dose, but the same dose can one day result in constipation and the next in diarrhea. Unfortunately Miralax is often necessary to soften stool. Make changes slowly, as it can take days to see results. One of the advantages of other bowel management programs such as enemas is the possibility of decreasing or eliminating the inconsistencies of Miralax. Some people also add it to their enema solution with success.

Stimulant Laxatives: These medications stimulate peristalsis to help the colon push the stool through the colon. They are the most powerful of the laxatives. Many doctors warn that a typical colon can become dependent on stimulant laxatives, but it is widely agreed upon among those in the SB communities that neurogenic bowels must be dependent on something to empty. The most popular stimulants are Senna (brand names include Ex Lax and Senokot) and Bisacodyl (one brand name is Dulcolax).

Some people use a combination such as Miralax and Senna to both soften the stool and help push it out. This combination works best for people who can feel when they need to go, or young children who are not yet expected to achieve continence.